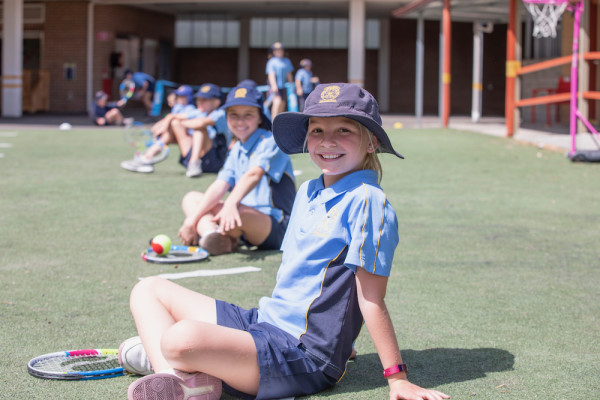 Our Holy Cross school and parish community acknowledge and pay respect to the traditional custodians, past and present, of this land, the Dharawal people – who long before us lived, loved, taught and raised their children on this land.

Helensburgh was officially named by Charles Harper in 1886, coal was discovered and mining commenced two years earlier in 1884. Between 1890 and 1893, the first Holy Cross Church – built of timber, iron and fibro – was constructed on Parkes Street, opposite the mine entry.

In 1896, a Catholic school began in the church, Miss Spellman was appointed as the first teacher. From 1898 to early 1900 a Miss Grace O’Brien taught both children and adults in the church.

We are blessed that we walk the same streets that Australia’s first Saint, Mary of the Cross MacKillop did when she came and stayed for a short time in Helensburgh.

In May 1900, Mother Mary MacKillop came to Helensburgh with her Sister’s of St Joseph, established a school and convent. In a letter from Mary to Sister Benedict we read,

“Last Monday (14 May 1900) we opened the school at Helensburgh. I went the previous Saturday, taking with me Sisters Emilian Dempsey, Louis Mary Daly and a Postulant. We opened with 56 pupils.”

The Sisters were warmly welcomed and very much appreciated by this struggling community. They soon set about raising funds to build a convent for the sisters, next to the church.

The building continued as both church and school until 1954. A former pupil describes the weekly routine:

“When school began on Monday morning, the heavy faded red curtains were drawn across the alter rails, carpet rolled up, seats turned over, how quickly it would again be a classroom, third and fourth class up the front, fifth and sixth class down near the door."

In 1954, a new parish school was built in McMillan Street, using voluntary labour. There were two large classrooms with a removable partition for functions and two smaller rooms, a tuckshop and the “box room”.

The school today remains a part of the system of schools within Catholic Education Diocese of Wollongong.

There were a number of building improvements and additions to this original building over the years since 1954. There were major building projects completed in 1986 and 1996 on the top playground that are still in use.

The building program that followed resulted in the wonderful 21st century classrooms, library, canteen and other facilities that we enjoy today.

In 1982, the first lay principal was appointed to Holy Cross and the last Sister of St Joseph was withdrawn from the school in 1986.

The year 2000 was a big year for our school, with many celebrations honouring 100 years of Catholic education inspired by the Josephite tradition evangelisation and love in action.

After all these years of devotion by the sisters to the children and families of our parish school, we still cherish our Josephite heritage and never forget all that our school community owes to Saint Mary of the Cross MacKillop and her sisters.

We strive to continue the Josephites' work of offering excellence in education and being a faith-filled Catholic community, bringing our students closer to knowing and loving God and in the words of Mary of the Cross, “Never seeing a need without doing something about it.”

A Catholic School in the Diocese of Wollongong

Catholic schools have a long and proud history in the Australian educational landscape. Originally established by orders of brothers, nuns and priests in the nineteenth century, they are now almost entirely staffed and led by lay people.

Catholic systemic schools in the Diocese of Wollongong are either parish primary schools like Holy Cross, or diocesan secondary or K-12 schools. They are all co-educational schools. (The diocese also has another seven independent congregational secondary schools, some of which offer single-sex education.)

Catholic schools have a unique character because as well as being places where learning is highly valued, they are places where priority is given to a values-based education in the Catholic faith. This involves all staff and students proclaiming the Good News of Jesus Christ to the world. Staff identify strongly with their school and take pride in their work and the school’s achievements.

Take a Virtual Tour of Our School